So I spent a good part of Friday night and most of Saturday doing some much needed upgrading to the PC I use daily at home.  I know with the economy being what it is and the fact that we have thousands of dollars in medical expenses for Jon’s and Tim’s accidents this winter looming, that this may not have been the best time to do something like this.  However, I had been planning this for some time and I was able to do it very inexpensively.  If you been keeping you eye on the price of computer stuff lately, you know that this kind of stuff has never been cheaper.  So I went for it.

I basically upgraded my monitor, video card and operating system.  As you can see from some of these pictures, I should have spent some time upgrading my basement walls! Here are some details (on the computer stuff anyway). 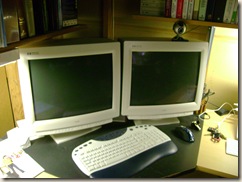 For the last 3 or 4 years, I have used duel 19” CRT’s as monitors for my desktop.  I had committed to using those until they grew too dim to use or burned out.  They were fairly old when I got them, so I thought I might get just a year or two out of them.  Well, today they still burn as bright as the day I got them.  They also consume a bunch of power.

So in the interest of being green, out they go!

I’ll be putting them on Craigslist if anyone is interested in picking up a couple very bright monitors. 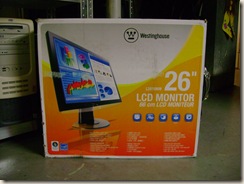 I replaced them with a single Westinghouse L2610NW Widescreen LCD Monitor 26” LCD Monitor.  It’s a monster!  I got it from Buy.com for $219, but found the deal on techbargains.com.  If you purchase tech gear and you haven’t seen this site yet, you are really missing out! (Thanks Chris L. for the tip!)  It retailed for $249 and I took the $30 credit card offer.

It’s light, energy efficient and very space friendly.  The deal is still on as of this writing, so if you are in the market…

I was using a Diamond Stealth X300SE duel monitor video card (256 MB or 128 MB for each monitor) that I had picked up from Office Max a couple years ago for about $60.  It was a great card at the time and ran both my 19” monitors fairly well.  However, fast forward to 2009, and I’ve been noticing lately that HD video content was starting to get a little choppy and it was having trouble keeping up.

I replaced it with an ATI All-in-Wonder HD combination video and video capture card.  This card not only has 512 MB of video memory, but it will also allow me to capture over the air HD broadcasts and record them for later viewing.  We almost never watch TV in real time here at the Collison house, so this was another real plus.  The card normally retails for $199.  It was on clearance for $109.  The antenna for the HD content was $29. 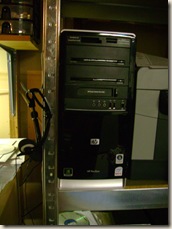 The PC I currently use, an HP Pavilion a6244n, was purchased some time in late 2007.  It’s 64 bit machine that came with 32 bit version of windows, back up media that I had to created from the hard drive and a good amount of bloat-ware that came with the original image.  Since I purchased it, I’ve wanted to take up to the 64 bit version of windows Vista and load it from scratch.  I saw this as just the opportunity to do that! 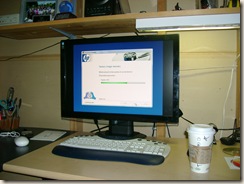 It all began several months ago when I ordered the x64 upgrade disk from Microsoft.  It’s $10 and they ship the disk to your door.  I was waiting for just the right opportunity to use it.  This weekend presented it.  On it went.

The amazing thing to me was not how long it took for the upgrade (just under and hour) but all the stuff I had to put back on once windows was complete.  Here is the short list.

So it’s done now.  The Home Server is backing it all up right now as I head off to bed.  Good night moon….

I search so you don’t have too!

Are you concerned with Skype and its reputation for being a spyware magnet? I know Gallup forbids it's use as did Wolfram.

I need to think about upgrading our systems at home… I have a bit of the chicken and egg problem though.

I think I need to upgrade Motherboard & CPU… But also need a video card (DVI port went out). So, if I buy a new video card, then I have to get one that isn't as fast since my motherboard is older.

My plan is to start with new case, then motherboard and CPU and start from there… thoughts?

Sounds like you had a fun weekend. Thanks for the tip on the Westinghouse L2610NW monitor. I’m looking for a good monitor that I can use for HDTV and this looks like it will work nicely.