We cover all your favorite tech that find it’s way into your home. News, reviews, product updates and conversation, all for the Average Guy!

Host Jim Collison and his super line up of hosts are LIVE each week with all the information you need.

Support the Average Guy Tech Scholarship Fund: and in Canada at ca

WANT TO SUBSCRIBE? We now have Video Large / Small and Video iTunes options at http://theAverageGuy.tv/subscribe Jim is the voice behind The Average Guy Network. He hosts the weekly Home Gadget Geeks Podcast, which focuses on helping people with consumer technology. Jim was named a Microsoft MVP in April 2011 and is a regular co-host on Ask The Podcast Coach

At his day job, Jim is an IT Manager for Gallup Technology, at Gallup’s Omaha, Nebraska office.

As a technology manager, he oversees the High School and College Internship Program for Gallup. Jim partners with Gallup’s Talent Resources team to recruit and retain world-class system and database administrators and software developers who support Gallup’s clients and the company’s internal systems.

Jim also is the producer of Gallup’s Webcasts / Podcasts found at http://coaching.gallup.com

Prior to joining Gallup, Jim served as the director of Enterprise Information Management for Omnium Worldwide. While there, he deployed a new business intelligence platform for the company. Jim was a also a long-time employee of Commercial Federal Bank, which became part of Bank of the West in 2005. While with the bank, he helped build an enterprise data warehouse and supported the marketing group.

Jim grew up in San Jose, California, was enlisted in the US Army from 1986 to 1992, and moved to Nebraska when discharged. He received his bachelor’s degree from Grace University in 1997. Jim currently serves on the Gallup Federal Credit Union Board as President. 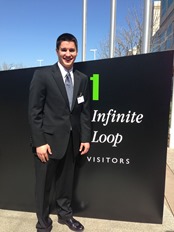 Mike Wieger was born and raised in Omaha, Nebraska. Technology and business were passions from a young age that lead to a degree in Business Intelligence and Analytics from Creighton University. He is now continuing his time at Creighton while in law school. Mike produces the Apple focused Open Mike Night podcast and does part time tech consulting. When not studying or indulging in technology he spends time hunting, dirt bike riding and enjoying the outdoors.