A new Windows worm, known as Downadup, is running free globally and F-Secure has estimated that within the last 2 weeks, it has infected well over 8 million PCs.  The numbers only continues to grow.

The good news for you is that it mostly affects business PCs and not home users.  Microsoft released a patch to fix this issue back in October but many corporate IT departments have been slow to apply patches in house.  If you have your automatic update feature turned on in Windows and have been receiving and installing regular updates, you should be fine.  You might want to check the last time you ran a virus scan.  If it’s longer than a week, run it now.

The bad news is that most of us have a PC at work as well.  Check with your IT folks to determine if they have the right patches on your work computer.  While the worm is fairly harmless at the moment, it could easily be changed to harvest personal and private info about you or your organization.  If they don’t believe you, I have left some links that will help you out!  You might want to take a second to read them as well.

Speaking to the BBC, Graham Cluley, senior technology consultant with anti-virus firm Sophos, said the outbreak was of a scale they had not seen for some time.

"Microsoft did a good job of updating people’s home computers, but the virus continues to infect business who have ignored the patch update. 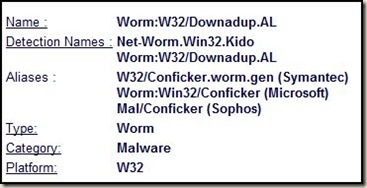 "A shortage of IT staff during the holiday break didn’t help and rolling out a patch over a large number of computers isn’t easy.

"What’s more, if your users are using weak passwords – 12345, QWERTY, etc – then the virus can crack them in short order," he added.

"But as the virus can be spread with USB memory sticks, even having the Windows patch won’t keep you safe. You need anti-virus software for that."

Remember, I search so you don’t have to!