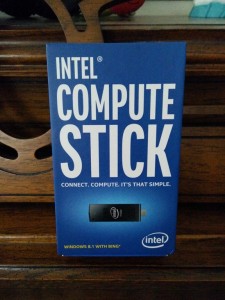 In my last post on the Intel Compute Stick, https://theaverageguy.tv/2015/11/23/hands-on-review-of-the-intel-compute-stick-windows-boxstck1a32wfc/,  I had run into a couple of difficulties, but it had ended with a positive feeling. That didn’t last, shortly afterward the fit started to hit the shan.

I had upgraded from Windows 8.1 to Windows 10, which had seamed to go without any issues, but afterward I started to have some problems. I installed Handbrake, to use as a benchmark on CPU power. The app would crash every time I tried to run it. I have never had any problems running Handbrake on any computer before. I tried reinstalling the app, but I didn’t have any better success, so I dropped it to moved on to other things that I wanted to test.

I thought of trying to install Windows 7 on a different computer and then coping a drive image to the Compute Stick, but I didn’t want to go there and it is definitely beyond what an average user would try. I also thought about trying to install 64bit Windows using the hack, but seeing that Intel’s firmware seems to be picky on what Operating Systems it will allow to boot, I decided I wasn’t going to waste the time trying.

Of course Microsoft had just discontinued Media Center for Windows 8.1 a week or so before, so going back to Win 8.1 and installing the PRO pack wouldn’t have gotten me anywhere ether. So the Media Center test is a write off.

Next I installed an application called MatterControl which is my preferred app for controlling my 3D printer. The app installed fine and I was able to manually control the printer, but when ever I tried to start printing an object, the app would crash. I now had two apps that had never given me any problems on any other machine crashing on the Compute Stick. I decided to do a clean install of Windows 10 to make sure there wasn’t a problem with the upgrade. There have been reports of people having issues after doing the upgrade to Windows 10.

I setup the Windows 10 installer on a USB flash drive and tried to do a clean install, but I couldn’t get the install to start. I tried it on another UEFI computer and the installer worked. So I decided to try to see where the recovery and repair tools would get me. Window’s tools wouldn’t allow me to do a recovery and when I tried to run a repair, it wouldn’t complete. I next tried the Windows 10 reset feature. I let it run for a day and a half before I rebooted the device and I ended up killing the installation completely. At this point I had completely toasted the operating system to the point that it wouldn’t even boot to the repair tools.

So the Compute Stick was all but bricked; I couldn’t get any version of Windows to install, even a Windows 8.1 32 bit version. This is where I’m thankful that I had used Ubuntu to make an image of the original installation when I first received the Compute Stick. I marked the UEFI setting change to boot Ubuntu and put the image file on a flash drive and went through the process of writing it back to the internal storage. It did take almost a day to complete, but it did competed. An after I switched back the OS boot setting I tried to boot windows and it failed with a problem with the boot sector. But I was able to get the Windows 10 repair tools from the USB installer to perform a repair on the boot sector and after a reboot Windows 8.1 came up just like when I first got the Compute Stick.

After all of this I have to say that I’m a bit disappointed with this device now. It performs well enough for what it is, but I think Intel cut too many corners when making this device. They seem to be trying to lock it to only a couple of selected operating systems and in the process making it difficult to install any other Operating System and then not providing any form of recovery software, not even at an extra cost. I’m at the point where I wouldn’t recommend the Compute Stick for any one who wants to do anything other than surf the web or stream video from Netflix or the like. For techie people who like to fiddle with the things, the Compute Stick makes things harder than they need to be.

I haven’t totally given up yet. Now that I have Windows 8.1 back on the device I’m going to try Handbrake and MatterContol again. I would still like to have a low power device to drive my 3D printer.