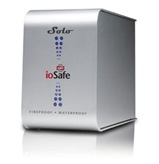 After watching Dave burn his “evaluation” drive from ioSafe, I knew I had to have one.  No, I’m not going to burn mine, but I am going to install it on my Home Server as a back up drive and use it to store copies of my files and PC backups.  Safely and soundly.

I purchased it from Amazon (full disclosure: ioSafe did nothing to influence this post) and saved almost $100 off the list price from ioSafe.com.  Right now it has free shipping (ordered it last Friday and got it the next Thursday – 6 days) and comes in at $230 for the 1 TB box.  I know, I could get two 1 TB external drives for that, but they are not water and fire proof!

Amazon shipped it in a box that was almost twice the size as the drive and put nothing in the box to keep it from sliding (nice work Amazon), but the packaging from ioSafe was quite secure and very plain (just a white generic box).  My youngest son Tim carried it in and thought it was an entire computer.  We have a bunch of PCs in the house, so this wasn’t a stretch.

The drive itself was held in with nice foam padding and was very secure.  Nice job ioSafe, Amazon needs your help.  See the pictures below. 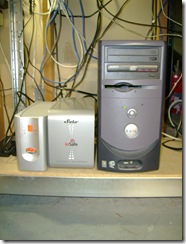 I installed it right next to my Home Server and UPS.  Here are my WHS specs:

One potential drawback is that it only comes with USB connectivity.  For me, this is not a real big deal, since I am only going to use it as a backup for the WHS and speed is not important.  What is important, is the fact that it is both fire and waterproof.  If the house catches fire, my data should survive both the heat (up to 1500 degrees!) and the water necessary to put out the fire.  I am in a location were flooding is not really an issue (I live on a hill) but if it did, it could survive under 10 feet of water for up to 3 days.  Good enough protection for me.

I had originally purchased the 500 GB drive last Friday, but cancelled the order just minutes after I placed it.  After thinking about it (with an amazing prompting from my wife), it only makes sense to go for the extra 500 GB for $70.  I think that decision will payoff in the long run.  More space is always good.

I started first by installing the drive to the Home Server.  Just plugging it in and turning it on and the WHS recognized the drive (Hitachi) without a hitch. 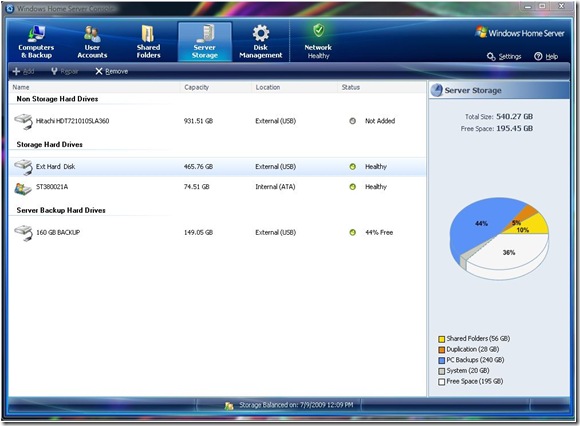 Next, I added the drive to the server as a backup drive and not part of the storage pool.  This will allow me to use it to back up the shared folders as well as the PC backups. 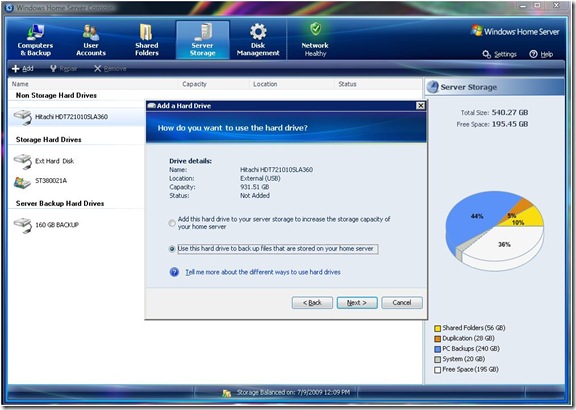 Since the drive was new, I selected the format option. 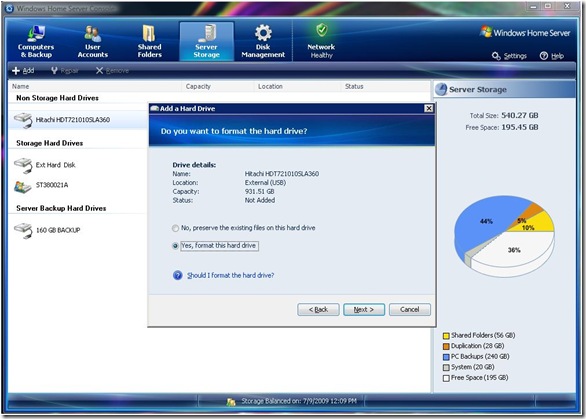 It then gave me the option to name the drive.  Of course, I named it “IO SAFE".” 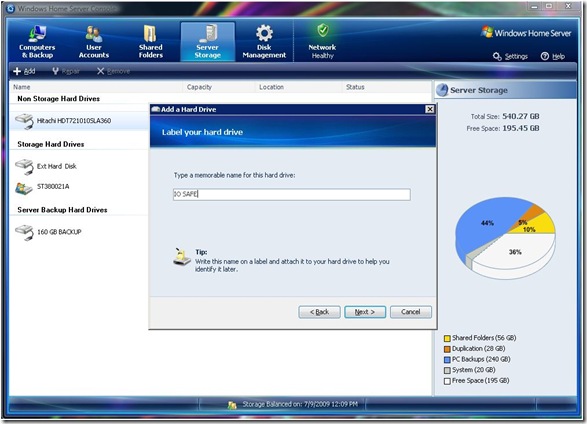 This gave me a clean drive.  The format took about 1 minute. 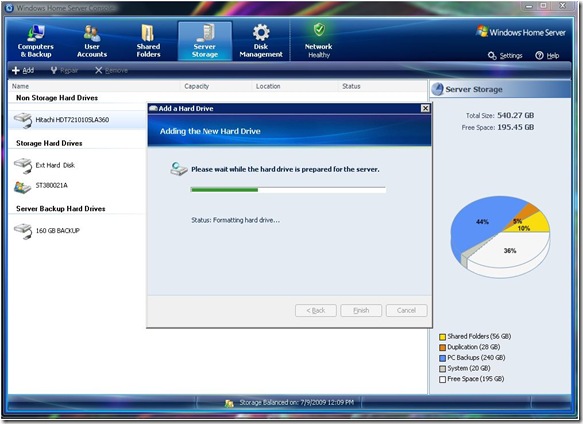 Here is what it looks like after the install. 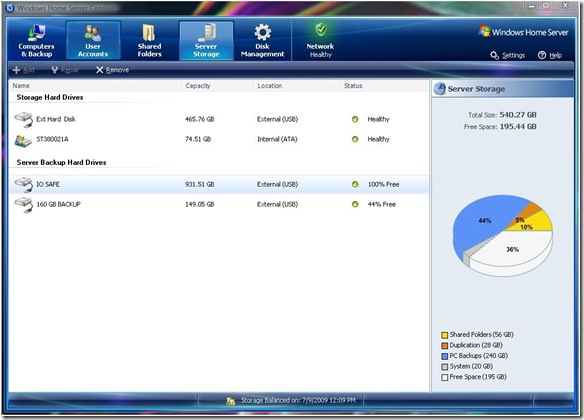 Once the drive was installed, it was time to switch my backups from the original 160GB backup that I had been using and point everything to the new ioSafe drive.  I started by going to the Computers and Backup Tab and viewing the backups for the Home Server.  I selected the new drive. 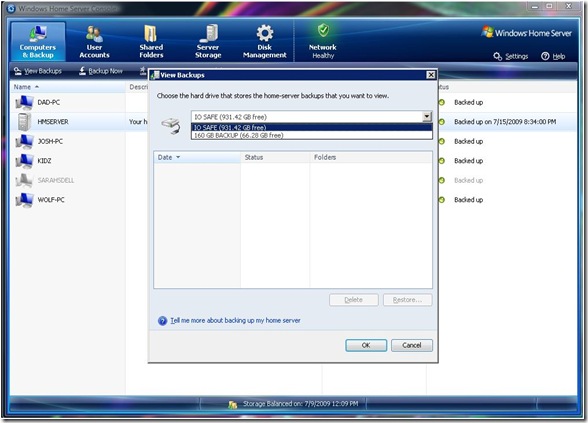 I then went through each folder and changed the location at the folder.  This seems a little redundant? 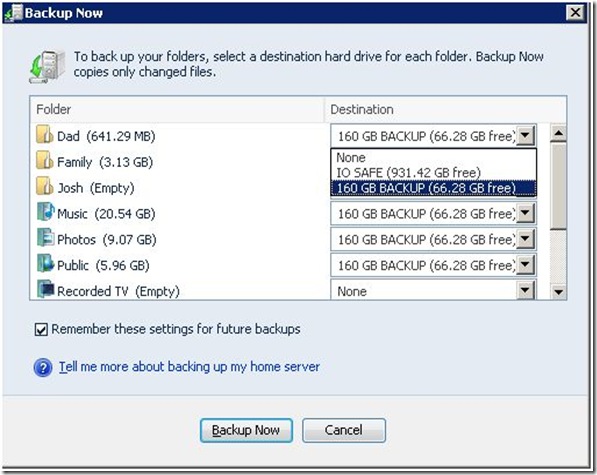 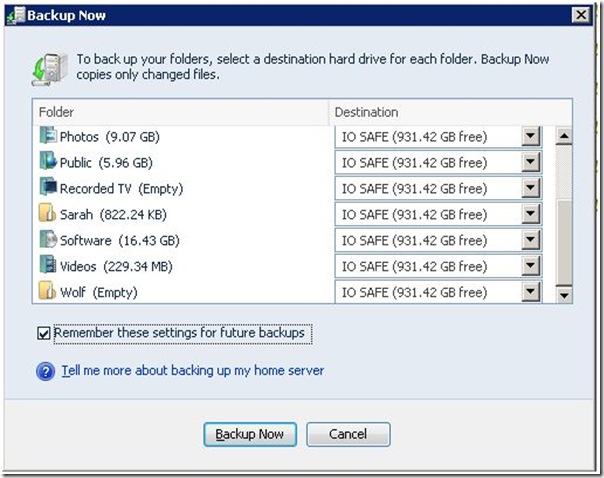 Selecting Backup Now gets the the entire process moving.  It took about an hour for 55 GB of data to be backed up.  This was just my shared folders. 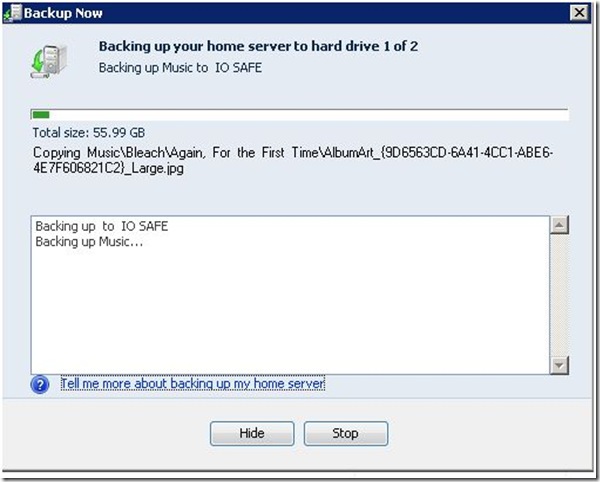 Once the backup was complete, I could decommission the old 160 GB drive and make it a part of my storage pool.  Compared to the twin 500 GB drives I use normally, this isn’t much.  But it’s better than nothing.

Next, I will install the DBDD Add-in to my Home Server and Back up the PC Backups.  Will have to save that for part 2.

Remember, I search (and install Fireproof / Waterproof drives) so you don’t have to!