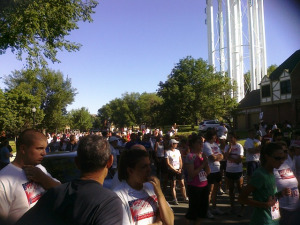 I’m sure you had a busy week!  I know I did.  It was a holiday week with Monday being Memorial Day for us here in the US.  Traditionally that means some down time or BBQ in the back yard.  Not so much when you start training for a marathon.  I have 17 weeks until the Omaha event and I want to hit that 4 hour goal that I have yet to make.  That means running…a lot of running!

It started Monday with the Boys Town 5 mile run.  The weather was great and course was a challenge.  It was the first time I had the opportunity to run with my #4 son Tim, and he did great.  We were able to run the first two miles at a [10:30] pace and then run/walked the rest of the course, finishing in just over an hour.  Sarah also walked the race in 75 minutes.  It was a fun day for the 3 of us!

Tuesday brought a double run with a 3 mile run at 3 pm and a 4 mile run at 4 pm.  (No, I don’t usually run the hour!)  Because of some scheduling commitments, I ended up running twice this day for total just over 7 miles.  Both runs were hot, but the 4 pm run was surprising a bit cooler.  Thanks Jamie, Stephanie and Bobby for running along with me!

Thursday was a 6 mile hill run through my old neighborhood in Omaha.  We took a route that is now gaining some fame among Gallup runners!  If you head south through the ConAgra campus and under the railroad lines, you are in some San Francisco like hill country.  Park Wild Ave is a 400 meter climb that really works the legs.  Rolling hills take you to Bancroft St and a right turn takes you down to 10th Street.  Left down the hill until you almost reach the Omaha Zoo and then turn around back up the long climb that is 10th Ave.  It just 6 miles but it feels like 13.  Its a similar route to one that is on the Omaha Marathon, so it’s good training.  Going to schedule this route once a week for the next 12 weeks or so! 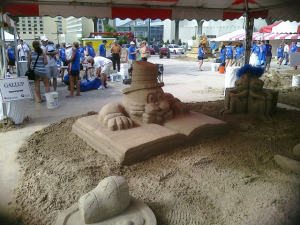 Friday brought us the First Friday 5K event at the Gallup Campus.  We had about 30 runners/walkers show to complete a 2K/2M/5K course.  It was awesome to see so many people make it out.  It was very hot, but everyone did well.  The group will do it again in early July.  All to get ready for the corporate cup that is in September!

On Friday, I also participated in Omaha’s Sand in the City event.  Dump 350 tons of sand in the Qwest Center parking lot and add 16 teams and you get one crazy day of sand sculpting.  I must have shoveled a ton of sand all by myself!  The team did well and had a good time but it was a workout all in itself!

Saturday morning was all kinds of fun.  Rain, wind and hills in the Bellevue Barnburner 10K run!  They advertised it as gentle rolling hills, but that couldn’t be farther from the truth!  Most of the first miles is up Mission Ave from the river.  I think they found all the steep hills in Bellevue and designed the run around it.  At 53 minutes, I was lucky to finish under and hour!