Here are some quick links for those who are looking
Facebook: http://www.facebook.com/pages/Ni-Bthaska-Ke-Trail-Run/176146602425914
Results: http://www.teamnebraska.com/new/?page_id=33
Race Photos: http://www.flickr.com/photos/teamnebraska/

April 2, 2011 – Tough course!  Hands down hard!  I thought it was going to be a hilly run, but nothing could get you ready for this.  Nice course selection Ivan.  You killed us!

The day started out with a goal of doing 12 to 13 training miles that were on the schedule.  Last week’s 19 were but a distant memory and next week’s 22 are looming, but for this week, a step-back week (marathon training term), there was just a half marathon on the schedule.  I was excited. 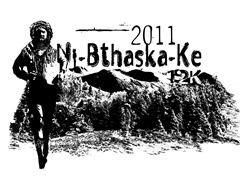 Anytime I can get some training miles around an event, I take it.  The Ni-Bthaska-Ke Trail Run (organized by Team Nebraska) was this weekend and it looked to be a good distance.  With the longer of the two legs being 7.4 miles, the thought was to get 5 or 6 ahead of it and complete the day with the race.  Sounded like a good plan on paper anyway. 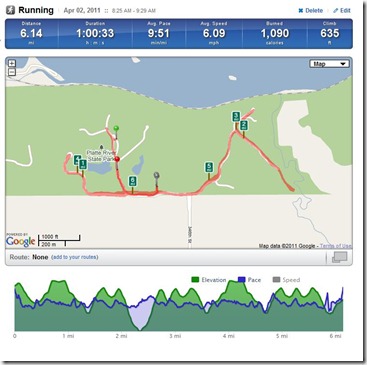 The day started with an early wake up and a [7:30] carpool with the newly named, “The Fab Five!”  That would be Bob, Erin, Michelle, Sarah and Javi.  Running friends and partners over the last two years, we all made the trek south to the Platte River State Park, arriving early so some could help with the race set up.  Michelle and I dropped our gear and started off on the early 5 or 6 that needed to be done before the race.  What I didn’t realize was how hilly the park would be.

The good news is that most of this run was paved roads and very clear.  This becomes important later.  You can see some of the elevation in the map to the left.  Click on it for a larger picture.

While Michelle and I tried to keep a fairly even 10 minute pace, the hills were some of the best training I have done in a while.  I told Michelle that I would have to come back to the park another time just to train for Colorado.  While you cannot simulate the lack of oxygen, you can work the legs like no place I have run in eastern Nebraska.  5 turned into 6 and we finished with about 6.1 under our belts and about 30 minutes to the race.  We headed to the lodge for some quick fluid and fuel.

This year’s race saw a doubling in attendance from last year.  Some 500 people showed up to take on the pain of trail running.  I had talked to Ivan earlier in the year and he had mentioned that he was changing the course to add some additional challenge and he wasn’t kidding!  The race started promptly at 10:00 am and most of the 500 were off into the woods.  Then the fun began. 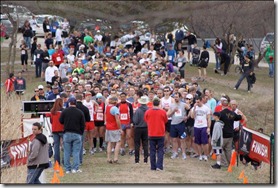 Most of the trail consisted of a single lane path that moved through the trees.  From time to time you would hit a road or a wider path that would enable you to pass, but that was not the norm.  In the early part of the race, when people had energy, runners bunched up on the downhill slopes.  Some of these hills proved to be a challenge to navigate both up and down.  For me, the first half of the race went well.  I got around a few Clock Blockers by passing them on the up hill portions and then found a train of runners to join on the trails.  It was quite fun! 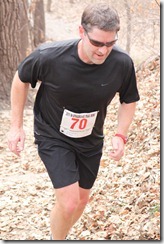 At about the half way mark, the days hills began to wear on my legs.  Believe it or not, I was finding the declines much more difficult than the inclines.  For about the last mile I ran up the hills and walked down the back side.  Toward to the end, I could hear the finish and it was nice to have it done.  I have run many races in the last two years and I am not sure I have run a day that was as tough as this one.  It took me a few minutes to gather myself at the finish line (Sarah and her sister Barb were there to greet me) and we made our way back up to the lodge for the noon festivities. 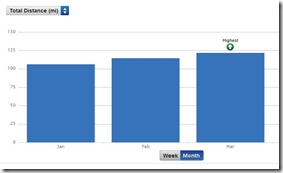 The last three months have been some of the best training I have done in my life.  With 106 miles in January, 114 in February and 121 in March, I have made the steady improvement that I have been looking for leading up to the Lincoln Marathon.  There is still 4 weeks to go, But I am really feeling good about a sub 4 hours marathon this year.  Each long weekend run takes a bunch out of me, but by Monday, it’s time to train again!

The next couple weeks are all training and the start of the marathon taper.  Looking at running the Eagle 10K and 5K (will run both to get my training miles in) on April 16th and then getting ready for the big one.  Still a bunch of miles ahead.  Thanks for hanging with me!