September 16, 2012 – This was the second year in a row that I have come off of the Lincoln Marathon with an awful summer of training.  For the record, its been a long, hot summer and running was the last thing on my mind.  I had good intentions for a 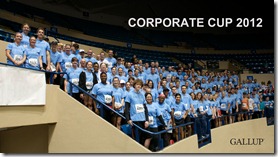 summer of training, but when the best moment in the day was when I decided to not workout, there is a problem.  June – Aug…not great.  September…much better.

In a weird twist, my time for 2012 was the exact same time as 2011, [51:58].  To the exact second.  With the same kind of summer (minus the Omaha floods) training, I guess the same time is in order.  The run felt good and recovery today was quick.  That’s a what a good base can do for you.

At Gallup we put the Corporate Cup on our running calendar every year and we do it early.  Even though my summer was rough, I knew this would be there to greet me.  It was a warm welcome! 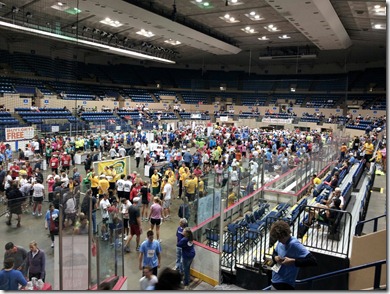 This morning, Gallup fielded a record number of runners (212 was the last count I knew of) and showed up in force.  For me, the morning went by very quickly.  8:00am arrival, [8:30] team picture and a quick walk out to the seeded section.  A group of about 10 of us gathered and chatted about the race ahead.

The weather was not great, but better than the rain in 2011.  Since I had not been training regularly, I had no idea what my legs would bring me.  Could go as fast as 48 or as slow as 55.  Just no way to tell.

I started the race with my running partner Dave Cihal (looking more and more like Steve Prefontaine everyday and pictured above) but lost track of him after the first mile and a half.  I settled down and ran with a couple other Gallup folks from mile 2 – 6 and enjoyed the run.  It went very fast. 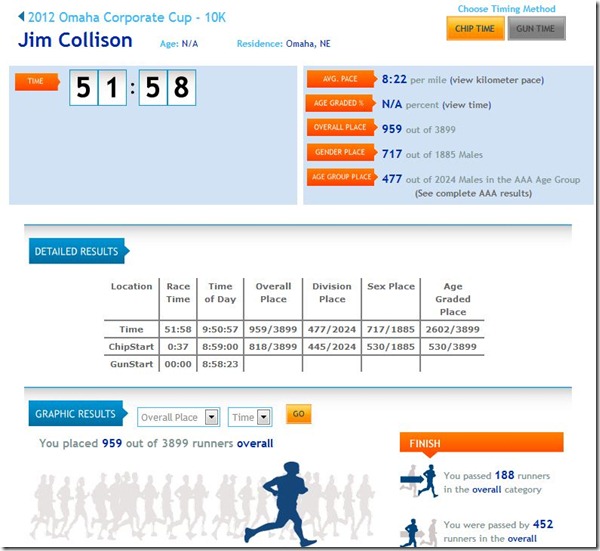 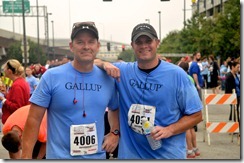 For the first time, I ran this race with ear buds and music.  In the last 4 years, I have gone without music and enjoyed the sound of the run.  With some reflection this summer and the need to shake something up, I opted for my iPod shuffle and some tunes.  It was nice to have the music for the run.  Will have it running next week.

Speaking of next week, Omaha Half Marathon is up next.  I signed up for it on Thursday after a really good training run with Dave.  He is running the full.  I will join him (if I can keep up) for the first 13.  Actually looking forward to it.  Anything under 2 hours would be great!