So April 1st came and went with out much hassle for the much talked about Conficker virus.  That doesn’t mean it’s dead, as some 4% of the worlds PC are infected with it (mostly in the far east).  Here is a short summary from the Vancouver Sun.

There are three versions of the worm and only one, which has infected the fewest systems, has the April 1 update code. The first version of the worm, Conficker.A, started to spread around the Internet in November. An updated version, dubbed Conficker.B, was released by the worm’s writers in January. Conficker.C has been programmed to update itself with an archive of websites on April 1. All three versions contain a list of 50,000 websites from which they can download commands from the individuals who programmed it

In an April 3rd post over at cnet, Seth Rosenblatt highlights a Joe Stewart tool from SecureWorks that very quickly determines if you have the virus or not.  The link to the tool and the instruction can be found a the link below. 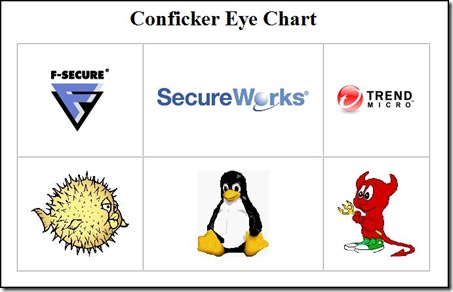 Remember, I search so you don’t have to!