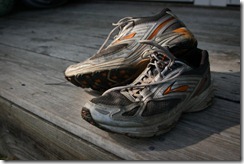 JUNE – Wow.  It’s been a busy summer of running, both in races and lots of long distance training.  It was a summer of some of the hottest conditions I have ever run in and it was a summer that included running across Nebraska (well, part of it), running across Grand Island and running not only across Omaha, but all the way from Omaha to Lincoln.  Thought I would spend a few minutes recapping  the major events and races of the summer of 2010 and get my times documented for future reference.  Here we go!

The summer really started on June 17th, when Brian Stark (http://statesrunner.com) came running thru town and joined 11 Gallup runners us as we ran with him from the Gallup campus through downtown Omaha.  He was making is way across the state of Nebraska over a 3 week period before the 4th of July.  I think he was a little surprised to see that large of a group on a typical humid summer day.  It was a short run that day for us, but a good one as we made our way to the new pedestrian bridge and back.  The group said goodbye to Brian and sent him running another 500 miles across the state.  We were all glad to hit the showers that day!

10 days later, I found myself running with Brian again as he made his way from Grand Island to Kearney.  It was a 42 mile day for him, and a 17.5 mile for me.  I left Omaha early AM (like 3AM!), drove out to Shelton NE where I dropped my bike.  I drive the 17 miles back to Grand Island and found Brian running already.  We ran out to Shelton where I picked up my bike and rode it back to the car.  35 miles total for the day with the two trips.  Weather was great, company was good and the running was fun.  I’d do it again tomorrow.  Brian did! 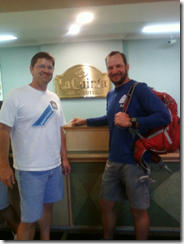 JULY – During the long weekend of the 4th, my parents were celebrating their 80th birthdays in Colorado Springs, CO.  As we were driving out there, we were able to meet up with Brian one more time as he was making his way to the Denver Airport for a flight back to AZ.  We picked him up at a truck stop in Brush CO around lunch and drove him the remaining 3 hours to Denver, saving him about 3 days of running.  We enjoyed some dinner together at the Olive Garden and dropped him off at his hotel for a nights rest before his flight.  The cool part about it all was the way he was able to live blog the entire run on Facebook!  During his run, we were able to keep up with him every step of his way.

AUGUST – With the weather getting hotter in Nebraska, the rest of my training was either long indoor runs on the treadmill or very early AM runs at one of the two lakes that we have near by.  I cannot tell you how many times I woke up on Saturday at 4 AM to drive out and loop the lake at Walnut Creek Rec area!  Assisted by several friends, the job of gradually longer and longer weekend runs got harder and more time consuming.  The entire month of August was committed to 30 and 40 mile running weeks.  I went thru several pairs of shoes!  It was a long month.

SEPTEMBER – On September 4th, I woke up early and made the 3 hour trek out to the Grand Island Half.  Not running the race for time (although I finished the 13.1 miles in [1:57:50]) but for training, was new for me.  I was instructed by my trainer to run at my marathon pace (9 minute miles) for the entire race and then turn around at the finish and go back out for 8 more.  I had never done that before and it felt kind of strange.  Some of the runners who were coming in behind me gave some dirty looks as I passed them going back out.  One even said, “Hey, didn’t you get enough the first time!”  I guess I hadn’t.  I came back in as they were handing out the awards, again, to some strange looks.  During the race portion, I was able to pace a gal in for her very first half marathon.  Her goal was 2 hours and we got there!  She was happy to be running with my help. That’s always the best part of running 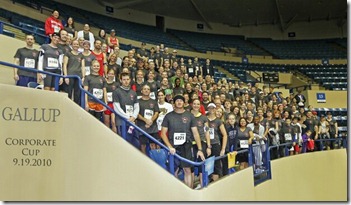 September 19th brought the 2010 Omaha Corporate Cup and over 150 runners from Gallup to the premier 10K event in downtown Omaha.  Each year this event gets bigger and each year for the last three, Gallup has sent more runners than it had from the year before.  Knowing that I had the Omaha Marathon the very next weekend, I wanted to be careful not to run too hard, but being in the best shape I’ve been in for the last 20 years, I could feel a PR coming on.

Sure enough, [46:32] (that’s [7:30] miles for 6 miles!) smashed all previous PRs at this distance and got me the results I had been looking for as well as a boost of confidence going into the marathon the next week.

Gallup as a team also did very well.  Congrats to both Ryan and Jamie (our Gallup Trainers) for doing a great job on both organizing the team for this event as well as training us all to be the best runners we could be!  Most of the runners I talked to after the race said that they had done better than the year before.  That’s what it is all about!

Well, that gets us half thru the summer and starts us into the fall and three more races left on the schedule.  The big event in the Omaha Marathon, the Race for the Cure and the 3rd Annual Marker to Market relay.  I will post those in the coming days, just as soon as I write them!

Thanks for following along!

Remember, I search (and run) so you don’t have to!