September 26, 2010 – There couldn’t have been a more perfect morning for a marathon.  It was just short of 50 degrees at the start of race and almost no wind.  After a long summer of 5 AM runs with warm and humid conditions, it felt great!  This was going to be a good day of running.

The Omaha Marathon starts down at Rick’s Boatyard, just a quarter mile or so from the Gallup parking lot.  I arrived at Gallup by 5:45 am and beat most of the crowd and hunkered down in the Fitness center for the next 30 minutes getting mentally prepared for day and taking in some calories.  They say that running is 90% mental and the other 10% is mental.  So I sat calmly and watched a little HGTV while I waited for the 7 am start.  By [6:30] I was ready to make the walk down to the starting line.  It was still a little dark.  I ran into Ronny and Jen Miller, who were preparing to run the half.  I hung with them until the race started.

While the Omaha Marathon is still an up and coming event in Omaha and attendance is growing each year, they still have some work to do on how they get the race started.  There were no visible pacers and walkers who trying to start the race in the front.  The street is narrow and will not be able to handle the amount of runners that they could get in the future.  Once I got past the start line and weaved around a bunch of walkers in the first mile, things settled down to normal pace.  I was shooting for 9 minute miles the entire day.

The course route loops around downtown and north Omaha for the first 10K and returns runners back to Rick’s Boatyard.  While not setting any land speed records, this loop was what I really needed.  At [58:27], I was feeling warmed up, on pace and ready to focus on the next 10K.  I also took a strategy of breaking down the race into four 10K races with a 2 mile finish at the end.  For me, it’s easier to think of it that way as opposed to one long 26.2 mile race.  I crossed same place we had started just an hour ago feeling great.  First section down…oh, and did I mention that I was doing live updates to Facebook?  I made the first update at this point (see above). 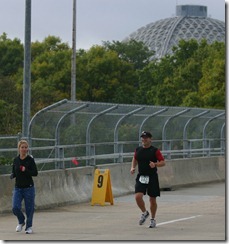 The next section of the race takes you south, through the ConAgra campus, under the railroad tracks and up one of the longest hills on course.  To be honest, the hill seems a lot tougher last year when I was just running the half.  I think it was perspective.  At the top of the hill, the halfers turn right on Hickory and those running the full head straight on a path to the Omaha’s Henry Doorly Zoo.  The next two miles were mostly down hill (which is always bad because you know you have to come back up those hills!) and easy.  Just before the South Omaha bridge, the course turns back and it’s a 3 mile trek back to Downtown.  Some where in there (I think back at the ConAgra Campus) I crossed over 13 miles and finished the 2nd 10K (updated Facebook too!).  Sarah was there throughout this leg to greet me (like she had been all morning) as well as several very dedicated friends from Gallup.  So dedicated, that at a very steep hill just after the Zoo, Stacey (one of those cheering me on) jumped out and ran with me up the hill!  Very helpful.  Thanks Stacey.

Once you pass the downtown and the new stadium for the College World Series, the halfers make a right turn to go in and the rest of us head up into north Omaha.  It gets very lonely and very quiet during the 3rd 10K.  From mile 15 to mile 20, it’s a very flat run through some very old neighborhoods in Omaha.  At 16 I had some lunch that Sarah had brought me and took a second to update Facebook from my phone.  At both mile 18 and mile 20 (because the course double backs) there was very good crowd support.  By this time, my body was beginning to feel the effects of running for 3 hours.  My 20 mile time was [3:10:44], the legs were tight and hips were giving me some pain.  I’d come this far.  If I could just run the final 10K in less than 50 minutes I would have a sub 4 hour marathon. 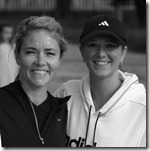 Like in Lincoln in the spring, I had some very amazing friends join me running during the race.  If you have never run this distance, you have no idea how helpful it is to have someone running beside you.  This race was no different.  At the 20 mile mark, Stacey (who had run the hill with me an hour earlier) and Yvette (both Gallup friends) joined me and would run the next 6 mile with me to get in.  There was lots of encouragement and some painful running.  Thanks gals!

Traditionally, the last 10K has been a disaster for me.  In Kansas City last fall, I ended up walking the entire final 6 miles.  In Lincoln last spring, I really struggled with 22 to 26.  I struggled in Omaha, just not as much.  In fact, we recorded a [9:45] mile for the 22nd.  With good training, I had moved the wall from 16 in KC, to 20 in Lincoln and now 23 in Omaha.  It was good to see that all those early morning runs were paying off!

The race gets a little fuzzy right at mile 24.  It was everything I had to make it to the finish…but what a finish it was!  At just over the 25 mile mark, Jamie, the other Gallup fitness trainer, joined our small group of runners and encouraged me all the way to the finish.  Interestingly enough, the last mile loops through the Gallup campus and provides an excellent reminder of why I do all this running.  The course also takes you under the new Bob Kerry Pedestrian bridge and to one of the most scenic finishes I have ever done (only second to Mt Evans of course!)  The gang dropped off a few hundred yards before the finish and it was solo to get it done.

I will admit, I walked a bunch in the last 2 miles.  It was just that hard.  However, once I saw the crowd and heard the screaming voice of Ryan Wolf cheering me in, there was no more walking.  In fact, I even found some speed left to use across the finish!  It was amazing.  Officially [4:19:28] was the entire morning and mission accomplished.  The entire gang that had been encouraging me throughout the race was there to see me finish.  Top 10 moment in life for sure.  Worth it! 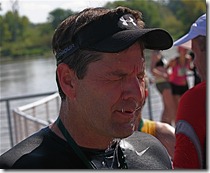 If you have never run a marathon and your body can take it, I highly recommend it.  Yes, it hard.  Yes, it takes lots of time to train for it.  Yes, it hurts when you are done.  However, the sense of accomplishment when you are done is incredible.  It’s kind of a physical, spiritual and emotional journey all rapped up into one event.  If I can do it, you can too.

This fall ended with two more amazing events here in Omaha.  Watch the blog.  There is more to come.

Remember, I search (and blog while running) so you don’t have to!