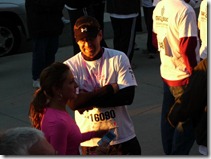 October 3, 2010 – If I have one thing to say about the weather in Nebraska, it’s generally crappy.  However, every race that I participated in this summer / fall sported excellent conditions.  Race for the Cure was no different.  A beautiful Sunday morning with 15,000 people, all dressed in pink, all out to support the fight against breast cancer.  With it just being a 5K and just coming off of 26 miles the week before, the run seemed very short.  I ran at a 10 minute pace, finishing the race in just under 30 minutes.  A good day of training and recovery.

It did mark the first time that I parked at Gallup and ran to the downtown area to get a race started.  At the end of the race I ran the mile back.  Call it a 5 mile day!

October 9, 2010 – 3 years ago, a new race was launched that took the idea of a “relay” to the next level.  Someone thought it would be a good idea to put together  6, 7, or 8 person teams and run all day from the Old Market in Omaha to the Haymarket in Lincoln.  XX miles total.  They just call it the Market to Market Relay.

This year, race consisted of 245 teams, 4 different starting flights (we were last at 8:15 am), 21 different exchange points and 84 miles.  Costumes were not required but encouraged.  Flights were set up so that the slower teams started first and the fast teams had the chance to catch them.  Only rule…all team had to be done by 8:00 pm.  Sounds fun?  It was.

Our first runner started promptly at [8:15] and was up against some of the fastest runners in eastern Nebraska.  Even running the first leg at a [6:55] pace wasn’t enough to keep up with most of the flight.  No worries however, it wasn’t long before we started catching the flights ahead of us.  Each exchange point got a bit more busy and bit more crazy.  They went something like this:

The team (who had just dropped off a runner and sent them off) would pile in the van (our minivan) and check the map for the next stop.  We would drive 4 or 5 miles, find the exchange point, find a place to park, make our way to the runners exchange point and wait for the runner we had just dropped off.  Cheer one runner in, cheer the next runner out, repeat the process – 20 times!  We had a team of 7, so each runner ran 3 legs.  The first one was okay. The second one was hard.  The third one was just gutting it out.  Made for a tough, but fun day.

The team gathered one more time at the Haymarket in Lincoln as we waited for the last team member to finish the 21st leg.  Then as a team, we ran the short distance over the bridge and to the finish.  The goal had been to complete the entire race in under 11 hours.  We finished at [10:59:36].  Another successful race.

Reflecting back over 2010, I did a lot of running.  Starting with the State Farm 10 mile back in March and finishing with the Market to Market, I ran more than 15 races.  By the end, my body was tired.  For the first time in 2 years, I wasn’t really excited about my next run.  So for now, it’s time to rest.  Next scheduled run is the Groundhog 10K in Kansas City in late January.