July 2, 2011 – I’m saying this right now, the Lincoln Marathon broke me!  Going back to my last post almost 2 months ago, I think I made it sound like a good day.  It wasn’t.  I left the road beaten down and worn out.  Month of preparation, hundreds of hours and miles of training and thought behind me and a perfect race day built up my expectation of a sub 4 hour marathon.  I REALLY WANTED THIS ONE!  It didn’t happen.  The race beat me.  I was broken.

In the weeks since the May 1st race, I have avoided the road.  About 20 running miles in 8 weeks and not very many good workouts.  I just didn’t want to be there.  The thought of running made me sick.  I was at the bottom.  I needed something to pull me out of it and quickly.

Today Q125 5K was a race that began to pull me out of the funk.  The 4th Annual Dodge Q125 5K in Dodge Nebraska was a perfect place for it to happen.  Beautiful morning, early start, short distance and 250 runners, small town atmosphere and a omelet feed right after the run?  Who wouldn’t love to run on a day like this? 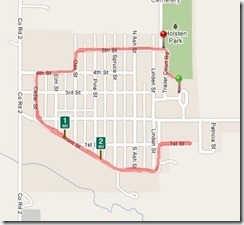 I was joined this day by my running partner, podcast co-host and Gallup Trainer, Jamie Eikmeier.  Jaime had invited me to run the race a couple weeks ago.  She said it was cheap ($15) and I was almost guaranteed to win an age group medal.  Who could turn that down?  Her running has been coming on strong over the last several months and she was excited to be back in her home town for the event.  With an 8am start, we met on the city parks baseball lot and prepared for the run.  At one point, I asked Jamie if she wanted to warm up?  She looked at me and said, “Nah, the run will be enough!”  Okay, then to the race it was!

Promptly at 8am, the race director (who was kind enough to podcast with us later in the day) started by telling the crowd of 260, that this was the largest race to date.  He thanked the crowd, shed a tear and started the runners with a whistle.  I barely had enough time to start my RunKeeper and my watch! 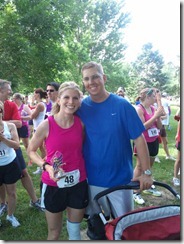 Jamie bolted out in an attempt to complete the race in 21 something.  I figured that if I could keep up with her most of the way, I would be okay.  She got about 20 years ahead of me and gave me a target to reach.  By the end of mile one, I had caught up to her and felt good about it.  I knew I wouldn’t be able to sustain the pace for long, so I said good-bye and she moved ahead.

In the end, Jamie finished just shy of her goal with a 22 something, and overall  and I finished just south of 24.  The good news is that for the first time in while, the mojo is back.  I feel good about the road and am looking forward to some summer mile ahead.  Thank God!

Jamie finished with the overall female first place trophy and I finished 2nd in my age group.  I had breakfast with 2 other of Jamie’s sisters and Jamie’s husband Jeff at the first ever Omelet feed.  It was $3 and huge omelets!  Love a small town.

So it’s back to training.  There are a few half marathons to shoot for in the fall.  Grand Island and Omaha.  Let the training begin!