May 6, 2012 – I had spent the last 6 months getting ready for this race.  With a goal for the 4th time of a sub 4 hour marathon in site, I was ready to get after this course.  Dave and I had logged some 500 miles of training from January 2012 to the end of April 2012.  We ran in the cold, the fog, the rain, the sun and some really beautiful winter mornings and evenings.  It had to be the best winter for running ever in Nebraska.  I think I ran on the treadmill only once.  It was truly Amazing.

This cycle was a little different than the past.  I ran with a dedicated training partner for almost all of the runs.  I ran two 20 mile plus weekend runs for the first time ever.  As I mentioned already, the weather was incredible for the entire winter.  With great weather and lots of miles, I was looking forward to a very successful day.

Morning of the race 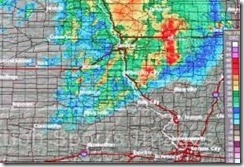 I awoke at 4:00am for a 5:00am departure for Lincoln.  There had been reports that the weather might be an issue with some rain forecasted, but what we got was far from a little rain.  When I open the garage door at 5, the rain was coming down in sheets and sideways.  Later we heard that the winds had gusted up to 75 mph in Bellevue and on our way to the race we saw my trees down.  Not the best way to start the day, much less a marathon day.  The storm put us about 30 minutes behind and on a tight schedule.

Sarah and I arrived in Lincoln about [6:30], stopped for a potty break, grabbed some coffee and walked across the bridge to Memorial Stadium for the start of the race.  Gallup had a group picture scheduled at [6:30] and we missed it by 10 minutes.  I headed over to a new start line (moved due to the construction at the east end of the stadium) with about 5 minutes to spare.  With about two minutes to go I found Dave, listened to the national anthem and tried to quickly get my mind ready for a very long day.  It all happen very quickly and without delay.  Gun sounded about 2 minutes after the hour.  Took us about 20 minutes to get to the start with the new wave system.  We started with the [3:55] pace team.  There was about 20 of us I think.  Never really counted. 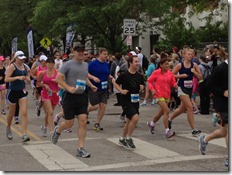 It was a festive start and it was good to see Sarah cheering at the first curve.  The pace chart started us with a very comfortable [9:45] pace.  Things only got faster from there.  Carolyn, (right) our

pacer, did an awesome job of keeping everyone on pace despite the incredible number of “Clock Blockers” throughout the first 13 miles.  I had stocked my pockets with 4 packets of Shotblocks for fuel for the race.  By mile 4, I had dropped one of the packets and by mile 5 I had dropped and lost the other two.  I was down to one pack for the next 20 miles!  That wasn’t going to work.  I need to find more fuel.

At that point I looked and Dave and told him, “Guess I’m living off the land?”  He gave me a strange look, looked over at some trees and chuckled.  I kind of panicked a bit.  Over the course of the next six miles (until mile 13) I found some jelly beans, orange slices and of course all the Gatorade and water I could get my hands on.  In the end, I still probably didn’t eat enough.  During the next marathon I am going to eat an entire buffet at mile 13.  Just saying.

Miles 13 – 19 were hard work.  I lost Dave to the heat around 14 and decided to stay up with the pacer.  That proved to be a good idea.  She got me all the way up the hill and into Holmes Lake.  I stopped a the water station just at the top of the hill to get water and she kept going.  From that point on I couldn’t keep up.  Holmes Lake (or death camp as I like to call it) has always killed me.  I was bound and determined to make it out in one piece this year.  I almost did too!

I crossed over the 20 mile mat at [2:59] (setting a new PR to that distance and was set to run a 60 minute 10K to complete the race, or so I thought.  On paper, it all looked good.  My legs however would write a different story.

Back up the hill out of Holms lake was tough and I ran through to the water station.  Drank just as much as I could and found a worker with a water hose.  It was quite hot by now and a run over the head with the hose felt really good.  Down the hill and just under 6 miles to go. 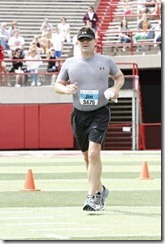 I’d love to say everything went well and compared to past marathons, it did.  The heat continued and at about mile 24 my wheels came off.  It was a miserable walk run the rest of the way in.  It was at this point also where the 4 hour pacer caught and passed me.  My 4 hour goal was slipping away if I didn’t catch him.  As fate would have it, I couldn’t. 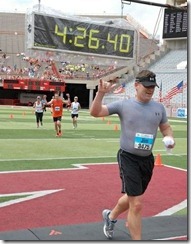 After grabbing a water, a Gatorade and some chocolate milk from under the north stadium, I headed out to find Sarah.  She had caught me in several spots during the race.  Beside the start, I saw her at 13, 17, 22 and right before the finish.  It really helped to have her cheering me on when the moments got dark.  I know she never really gets excited about me running that far with all the pain it brings, as well as all the Saturdays I have to give up to training. But in the end, she is a huge support and I couldn’t do it without her.  Thanks Sarah 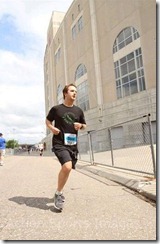 Dave Cihal was an incredible running partner since summer 2011.  He runs with strength, determination and will power, never quitting and never giving in to my cries of “shorter” distances.  He is consistent, running always what is on the schedule and never less.  He is a good friend who makes me laugh during every run and pushes me to do more.  In his words, 5 > 4.  Thanks Dave!  I couldn’t have done it without you.

Of course, I also work for an incredible employer who had the progressive foresight to see that fitness and physical well being are the key to healthcare costs and a better way of live.  Without the support of both Ryan and Heidi in the Gallup fitness center as well as the support from my teammates and management at Gallup, I can imagine a world without you all.

Going to take some time to heal, rest and enjoy some work around the house on Saturday.  I have plenty of projects that were put on hold this spring when most of the weekends were taken by either planning to run, running or recovering from running.  It will be nice to run a few 10Ks and maybe a half or two for the rest of the year.  My feet need the rest. 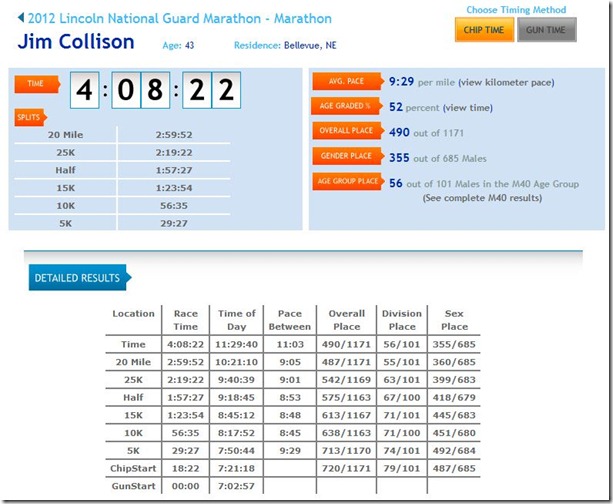