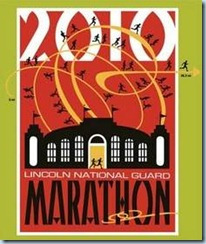 It could not have been better conditions in Lincoln, NE today for the 33rd annual Lincoln Marathon!  This was my second Marathon in less than a year and a chance to go coast to coast (run the entire race without walking) for the first time.  It turned out to be an amazing day in more than just finishing!  With the start temps in the 40s and no wind to speak of, we were set for a great race!

In case you have never run a marathon, let me chronicle my experience for you.  Hope you find it interesting.

The morning started very early with a [3:45] AM wake up and the normal race day nutrition.  By [4:15], I was dressed and out the door to meet some fellow Gallup employees for a carpool into Lincoln.  We arrived sometime around [5:45] and met up with Ryan to carry race packets to the Gallup meeting area.  On the way over to the meeting area, we got the chance to walk through Memorial Stadium and view the field from the ground level.  If your not a Husker fan, you cannot understand the significance that place holds in the state of Nebraska.  It was moment I tried to capture on my camera phone, but technology let me down and pictures were not happening.  Oh well!

By [6:15] the Gallup group had gathered and at [6:30] sharp we all took a team photo.  After the photo, I ran over to south Stadium to drop my bag of gear, took my last pre race goo and got in the line-up for the race.  On the way over, I ran into one of our pastors, Chad Stoner, who had come out to see the start, and we had a good chat.  He is a former Husker and old guy athlete like myself and gets how hard this stuff is.  He was encouraging.

I milled around the line-up for a few minutes and ran into some Gallup runners right before the start.  By the gun, we had a solid team assembled for the race.  After a long morning of prep, we were all ready to get running! 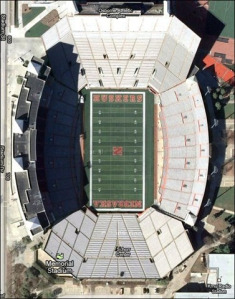 I clicked off the first 10K without any problems ([58:00]).  We had good conversations with those around us and spirits were high.  The course is flat to down hill for the first 6 miles, so it felt really good for most.  At mile 7, the course takes a turn back to the stadium and all that elevation drop from earlier had to be reversed.  There were a couple of good hills and for some, it was starting to show.  For me, I felt good and strong during this part of the race and enjoyed getting folks to start running again after they had stopped.  We must have restarted 5 or 6 along the way.  I clocked in at [2:03:25] at the half way point and was right on pace and goal.

For me, the first half of a marathon is just getting through it, without giving up too much energy.   In this case, I felt good about my reserves.  I could have spent the first half talking less, but if you know me, you know that’s not possible.  Just as I was dropping off the halfers (those running 13.1 miles), I saw Sarah, Tim and Sammie.  What an encouragement that was to see family cheering!  I was also joined by Michelle (a committed training partner, incredible runner and friend), who had committed to pacing me the second half of the race.  In the end, I was really glad she could do that for me. 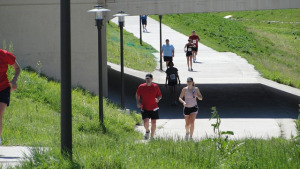 We picked up the pace a bit from 13 to 16, but by 18 was starting to struggle and my pace was slipping into the 10s.  The knee that had given me problems in KC was beginning to hurt again and the intestinal problems that I had on Friday were starting to come back.  I remember thinking with 8 to go, “man this is going to hurt later!”

We crossed over the mat at the 20 mile mark in [3:13:08] and at this point, my overall pace had slipped from [9:24] to [9:39].  It felt much worse.  The 10s became 11s and I was struggling.  Michelle did an amazing job of keeping me going.  She kept saying that I was strong, I had trained for this event and I was going to get through it and finish strong.  Thanks Michelle, I may not have thanked you then, but I thank you now.  It made all the difference in the world!

The road back to the Stadium is admittedly a blur at this point. It’s amazing I even got back!  I couple of bathroom stops, a walk here and there to drink, and a few moments of terror as I looked for a place to puke, and I found myself at 26.  Honestly, puking at 22 would have been very helpful.  Right after I was done, I had new energy and I could breath again.  Funny how that works.  Sorry if I just grossed you out! 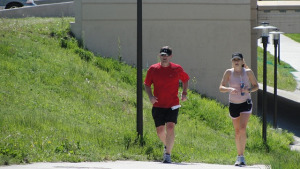 Michelle pealed off right before I entered the Stadium (did I mention that we finished at the 50 yard line?) and I got the thrill of running into Memorial Stadium to cheering fans and my entrance live on the big screen.  Quite a moment for me and all that I have worked for with running.  WOW!

All in all, it was a great race and I will do this again sometime in fall.  If you’ve never done something like this, you really should.  You take your body to the brink, then bring it back, all to see what you are made of.  Today was better than that cold, damp day in KC back in October.  With a time of [4:53] there, I definitely improved this time around.  Next time, we will shoot for [4:15] or better.  I need to conquer the second half of this race! 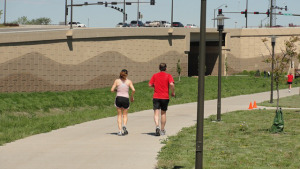 Thanks for hanging with me on this one.  Thanks to Ryan, Jamie and all the gang at Gallup who have helped get me to this point.  Thanks to Sarah and the kids for coming out and cheering me on from Memorial Stadium.  And a special thanks to Michelle, who gave up her Sunday morning to run 13 miles with me and wouldn’t let me quit!  Couldn’t have done it without you Michelle!

Now it is time to recover and get some rest.   Congratulation to all who tried and finished.  Job well done runners!

Bellevue Runway Run is next Sunday (7 miles)!  Who’s with me?